A quick beginning note: My friend d0c_s4vage has created a technical blog and posted his first text just a few days ago. The post entry covers a recent, critical libpng vulnerability discovered by this guy; the interesting thing is that, among others, the latest Firefox and Chrome versions were vulnerable. Feel free to take a minute and read the article here.

Additionally, the video and mp3 recordings from the presentation performed by me and Gynvael on the CONFidence 2010 conference, are now publicly available on the official website: link (Case study of recent Windows vulnerabilities).

A majority of the LPC /supposedly an acronym for Local Inter-Process Communication rather than Local Procedure Calls, as stated in WRK/ basics have been described in the first post of Inter-process Communication chapter, together with the corresponding, undocumented native functions related to LPC Ports. As you already have the knowledge required to understand higher abstraction levels, today I would like to shed some light on the internal Csr~ interface provided by NTDLL and extensively utilized by the Win32 API DLLs (kernel32 and user32). 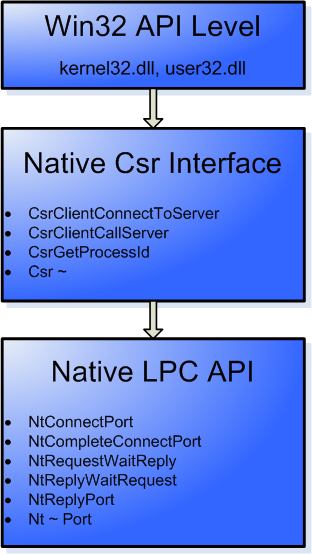 As explained previously, LPC is an (officially) undocumented, packet-based IPC mechanism. It basically relies on two things – a Port Object and internal LPC structures, such as _PORT_HEADER – both unexposed to the Windows API layer. Due to the fact that CSRSS implements its own protocol on top of LPC, it would become highly inconvenient (and impractical) for the win32 libraries to take care of both LPC and CSRSS internals, at the same time. And so, an additional layer between the port-related functions and high-level API was created – let’s call it Native Csr Interface.

The medium level of the call chain provides a set of helper functions, specifically designed to hide the internals of the communication channel from high-level API implementation. Therefore, it should be theoretically possible to re-implement the Csr-Interface using a different communication mechanism with similar properties, without any alterations being applied on the API level. This has been partially accomplished by replacing the deprecated LPC with an improved version of the mechanism – Advanced / Asynchronous LPC on modern NT-family systems (Vista, 7).

In this post, the precise meaning, functionalities and definitions of the crucial Csr~ routines will be focused on. After reading the article, one should be able to recognize and understand specific CSR API calls found inside numerous, documented functions related to console management, process / thread creation and others.

What has already been mentioned is the fact that every application belonging to the win32-subsystem is connected to the Windows Subsystem process (CSRSS) at its startup, by default. Although it is technically possible to disconnect from the port before the program is properly terminated, such behavior is beyond the scope of this post entry. However, some details regarding a security flaw related to CSRSS-port disconnection in the context of a live process, can be found here and here (discovered by me and Gynvael).

From this point on, it will be assumed that when the process is given execution (i.e. Entry Point, imported module’s DllMain or TLS callback is called), the CSRSS connection is already established. And so, the question is – how, and where the connection is set up during the process initialization. This section provides answers for both of these questions.

During a process creation, numerous parts of the system come into play and perform their part of the job. It all starts with the parent application calling an API function (CreateProcess) – the execution then goes through the kernel, a local win32 subsystem, and finally – ring-3 process self-initialization (performed by the system libraries). A step-by-step explanation of the Windows process creation can be found in the Windows Internals 5 book, Chapter “Processes, Threads and Jobs”.

As the CSRSS connection is not technically crucial for the process to exist (and execute), it can be performed later than other parts of the process initialization. And so, the story of establishing a connection with the subsystem begins in the context of a newly-created program – more precisely, inside the kernel32 entry point (kernel32!BaseDllInitialize). At this point, the CSRSS-related part of the routine performs the following call:

thus forwarding the execution to the ntdll.dll module, where a majority of the subsystem-related activities are performed. Before we dive into the next routine, two important things should be noted here:

When we make a step into CsrClientConnectToServer and analyze further, a great amount of CSRSS-related initialization code surrounds us. Don’t worry – a huge part of the routine deals with user-mode structures and other irrevelant stuff – our interest begins, where the following call is made:

As the above indicates, the global CsrPortHandle variable is compared with zero – if this turns out to be true, CsrpConnectToServer is called, taking the object directory string as its only argument. So – let’s face another routine ;>

The proc starts with the following code:

Apparently, the final Port Object name is formed here, and stored inside a local “UNICODE_STRING CsrPortName” structure. Next then, a special section is created, using an adequate native call:

This section is essential to the process<->subsystem communication, as this memory area is mapped in both the client and win32 server, and then used for exchanging large portions of data between these two parties. And so, when the section is successfully created, the routine eventually tries to connect to the named port!

For the sake of simplicity and reading convenience, I’ve stripped the remaining arguments from the listing; they describe some advanced connection characteristics, and are beyond the scope of this post. When everything is fine up to this point, we have an established connection (yay, CSRSS accepted our request) and an open handle to the port. Therefore, we can start sending first packets, in order to let CSRSS (and its modules – ServerDlls) know about ourselves.

So – after returning back to ntdll!CsrClientConnectToServer:

the following steps are taken:

First of all, the ConnectionInformation pointer is checked – in case it’s non-zero, the CsrAllocateCaptureBuffer, CsrAllocateMessagePointer and RtlMoveMemory functions are called, respectively. The purpose of these operations is to move the data into a shared heap in such a way, that both our application and CSRSS can easily read its contents. After the “if” statement, a first, real message is sent to the subsystem using CsrClientCallServer, of the following prototype:

For a complete, cross-version compatible table and/or list of Csr APIs, check the following references: CsrApi List and CsrApi Table. And so, in the above snippet, the “CsrpClientConnect” API is used, providing additional information about the connecting process. This message is handled by an internal csrsrv.CsrSrvClientConnect routine, which redirects the message to an adequate callback function, specified by the ServerDll being connected to (in this case – basesrv!BaseClientConnectRoutine).

After sending the above message, the connection between the client- and server-side DLLs (i.e. kernel32 and basesrv) can be considered fully functional.

As it turns out, parts of the execution path presented above can be also true for CSRSS itself! Because of the fact that ntdll!CsrClientConnectToServer can be reached from inside the subsytem process, the CsrClientConnectToServer routine must handle such case properly. And so – before any actions are actually taken by the function, the current process instance is checked, first:

Apparently, every process connecting to the LPC Port that has the SUBSYSTEM_NATIVE header value set, is assumed to be an instance of CSRSS. This, in turn, implies that CSRSS is the only native, system-critical process which makes use of the Csr API calls.

Having the connection up and running, a natural order of things is to exchange actual data. In order to achieve this, one native call is exported by ntdll – the CsrClientCallServer function, already mentioned in the text. Because of the fact that each Csr API requires a different amount of input/output data (while some don’t need these, at all) from the requestor, as well as due to the LPC packet-length limitations, the messages can be sent in a few, different ways.

In general, all of the CSR-supported packets can be divided into three, main groups: empty, short, and long packets. Based on the group a given packet belongs to, it is sent using an adequate mechanism. This section provides a general overview of the data transmission-related techniques, as well as example (practical) use of each type.

This post entry aimed to briefly present the “Native Csr Interface” – both in terms of the functions, structures and mechanisms playing some role in the Inter-Process Communication. As you must have noted, only client-side perspective has been described here, as the precise way of CSRSS receiving, handling and responding to the request is a subject for another, long article (or two). And so – if you feel like some important Csr~ routines should have been described or mentioned here – let me know. On the other hand, I am going to cover the remaining, smaller functions (such as CsrGetProcessId) in one, separate post called CSRSS Tips & Tricks.

Watch out for (part 3/3) and don’t hesitate to leave constructive comments! ;)
Cheers!