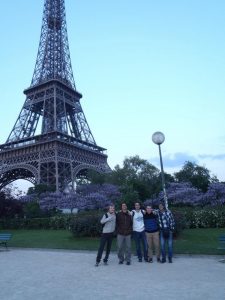 The first edition of the NoSuchCon security conference held in Paris ended just a few days ago. Before anything else, I would like to thank all of the organizers (proudly listed at nosuchcon.org) for making the event such a blast! Both the location, venue and speaker line-up were amazing, with lots of free beer and wealth of people to chat with. Overall, I am very happy to have shown up there and I will definitely make sure to attend the second edition of the conference.

Other than drinking, discussing 0-days and visiting Paris, I also had the pleasure to give a talk about the usual subject – Windows kernel security. The exact title of my presentation was “Abusing the Windows Kernel: How to Crash an Operating System With Two Instructions“, and touched on the subject of several different exploitation techniques, internal CPU related behavior and security vulnerabilities (all related to the Windows operating system) that I discovered during the course of last several weeks / months.

While the slide deck was made available to the attendees right at the beginning of my talk at nosuchcon.org/talks (great idea!), I’m reposting them here anyway, in case you haven’t had a chance to take a look yet. In fact, a majority of the talks were interesting and highly technical, so be sure to check the available material for all presentations ;-)

Slides: “Abusing the Windows Kernel: How to Crash an Operating System With Two Instructions” (3.3MB, PDF)

I originally planned to address six separate topics, but due to time constraints I decided to skip some of them in favor of the other ones. A brief description of each technique and vulnerability follows below.

7 thoughts on “NoSuchCon’13 and crashing Windows with two instructions”