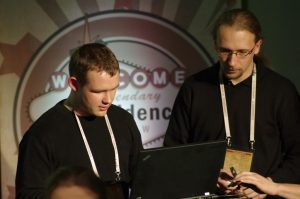 Another week, another conference. Just a few days ago, Gynvael and I had the pleasure to attend and present at the CONFidence 2013 infosec conference traditionally held in Cracow, Poland. The event requires no further introduction – it has been simply the best Polish conference in the security area since it first started, and this year’s edition was up to the usual high standard – we had some great time, meeting old and making new friends as well as enjoying some of the better talks.

With regards to our presentation, we originally intended it to be a gathering of references concerning all of the interesting quirks, undocumented behavior and other amusing facts (directly or indirectly related to the CPU architecture) that we heard or learnt about in both 32 and 64-bit x86 processors during the recent years. If you are closely following the CPU hacking and operating system security scene, you are probably aware of most of the material we presented – still, we hope it proves useful as a thorough reference and possibly motivates you to take a deeper look at some of the areas we discussed during the talk. In addition to what was covered on stage, you can also find several extra “further reading” slides containing references to information which did not fit into the elementary slide deck.

Download: Beyond MOV ADD XOR – the unusual and unexpected in x86 (PDF, 5.6MB)

Other than that, I also presented at a local Polish SEConference event in Cracow a few days earlier, using my NoSuchCon 2013 slide deck translated to Polish:

That’s about it, have fun!